In the territory of the Wine Route of Pisan Hills, suited to the vine since the Etruscans, they are produced high quality wines due to geographical indications or denomination origin which, in addition to represent an added value, play a fundamental role in the protection of cultural heritage of traditional production methods and natural resources.

Among these, from 1927 is Chianti wine DOCG, one of the first symbols of Made in Italy, made from Sangiovese, lively ruby ​​red color that is well suited to every occasion, improving with age.

Another traditional denomination is the White Pisano of San Torpè DOC, a wine with a dry, harmonious, delicate taste, with a lively aroma, better to drink young and fresh, made from Trebbiano Toscano and, lesser, from other white grape varieties such as Vermentino and Chardonnay. The name comes from the Roman centurion Terpezio, venerated as a saint by the Catholic Church, courtier of Nerone and by him beheaded in Pisa, on 29 April 68, because of his conversion to Christianity; after death the body was abandoned on a boat, together with a rooster and a dog, at the mouth of the Arno river, then found near Saint Tropez and so renamed in honor of the saint.

Throughout the territory, IGT wines hold a wide variety of types, which depends on the particular farmers decisions reflect the connection with the territory, among which ere the most of the so-called Supertuscans, great structure and longevity wines, thanks to an accurate selection of varietal, careful vinification and aging in small barrels (barriques) or large (tonneaux).

The hills of Pisa, in addition to wine, represent an important area for another excellent product such as extra virgin olive oil, produced with IGP Toscano quality certification.

The olive is the fruit of the olive tree cultivation, documented since Etruscan (seventh century BC) but only since the late Middle Ages has acquired a real importance with the expansion of the cultivation continued until the fifteenth century, to reach the maximum at the beginning of the eighteenth century; It is obtained from the fruits of different varieties of olives such as Frantoio, Gremignolo, Leccino, Mignolo, Moraiolo, Pendolino and others  in olive groves, alone or together for at least 95%.

The color ranges from green to golden yellow, fruity smell, accompanied by almond, artichoke and ripe fruit aromas; indicated for pasta dishes and legumes soups of local and regional cuisine, and over the traditional “bruschetta”, it is characterized by a level of maximum total acidity ranging between 0.5 and 0.6 g per 100 g of oil.

In the hills of Pisa is the most fragrant and delicious truffles in Italy or in the world: the white truffle (Tuber magnatum Pico) that the regional tuscany law defines as “white truffle of San Miniato hills”. Defined as “food of gods” is picked with the help of trained dogs, from September to December in the wooded areas of the valley and the hills, or along the waterways; it is estimated that in the Pisan hills is picked about a third of the national production. In addition to the white truffle in the territory of the Pisan hills, during other times of the year, you can collect different types of truffle as the black truffle, the summer black truffle said scorzone, and the marzuolo truffle also called “bianchetto”.

The truffle is for centuries food for noble rulers, to which legend attributes aphrodisiac qualities; it is said that the Emperor Napoleon Bonaparte, who stayed in San Miniato in 1796 visiting his uncle during the Italian campaign, was fond of truffles of these areas.

In the Pisan hills we were collected white truffles exceptionally large: in 1954 in San Miniato it was found one weighing 2.52 Kg donated to the then President of the United States; in 2007 it was collected in Palaia one weighing about 1.5 kg, won at a charity auction for € 220,000 ($ 330,000), as to be entered in the Guinness Book of Records.

In the territory of the Wine products are various types of pecorino cheese of high quality.

The first historical notes on pecorino cheese are from Roman times although it is believed that sheep farm in Tuscany dates back to the period of the Etruscans; It is known in the fifteenth century under the name “marzolino cheese”, due to the production that began in March and continued throughout the spring, in the mid nineteenth century this cheese was made according to specific production methods.

The Pecorino delle Balze Volterrane DOP showed already in the name a close link with a territory of origin more defined and characterized by the “balze”, large pits dug by the rainwater. It is obtained processing raw milk by Sarda breed sheeps, bred in the production area, and vegetable rennet made from the thistle inflorescences that is perceived by the scent. Thanks to the mild flavor it is frequently used in the traditional recipes of Pisa.

Pecorino Toscano DOP is a soft or semi-hard cheese, produced with whole milk in forms characterized by a yellow crust. Sweet taste, can be used as a table cheese or for grating, depending on the seasoning. 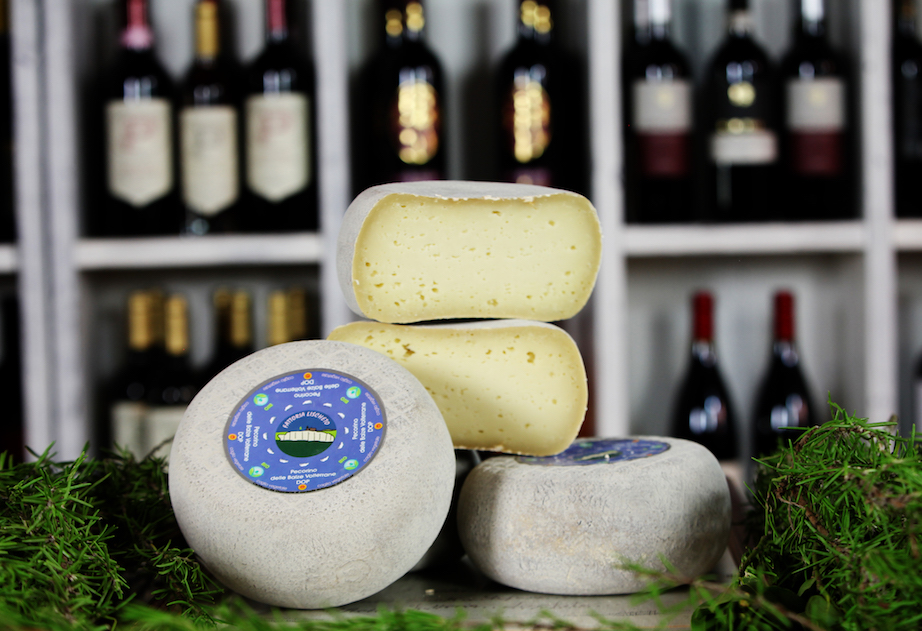